This webpage uses cookies. They are harmless and are used for anonymous traffic measurement. By using our webpage you agree to our use of cookies. OK

Udstiller
Back to the overview

HaemoMedtec provides diagnostic and pre-analytical equipment for many types of organizations.

The latest focus is pre-analytical systems, such as our own SBQSystem and a brand-new cart which, as something completely new in Northern Europe, includes a pre-analytical robot.

Pre-analytical robots are an area of increasing focus, as many have discovered how much gain is obtained, not only for the individual patient and the laboratory, but also socio-economically, by focusing on this part of the analysis work.

Via these preanalytical robots we in HaemoMedtec focus on the correct labeling of test tubes, that it is the correct test tubes, and not least to automate some processes and thereby release staff for other tasks.

Our experience shows that there are many other benefits after installing for example the SBQSystem, including better ergonomics for the phlebotomist, but also a benefit for the patients in general, saying that they have the feeling of a better patient experience.

SBQSystem is an automated patient system for outpatients.

When the patient arrives he scans his ID, and behind the wall the pre-analytical robot BC-ROBO 8001RFID produces tubes for the patient using data from the LIS/HIS-system.

SBQSystem then automatically deliver a bag complete with ID, barcode-labeled tubes and queue number directly to the patient.

The patient goes to the waiting area and is waiting to be called in via the number board. The bag is handed to the phlebotomist and the phlebotomy will take place as usual.

The cart is so new that it has not yet been named! (We expect to have found the right name before the exhibition).

The cart has been developed and produced in cooperation with Danish bioanalysts and Danish companies and we think we have found a good result.

The cart is built around the pre-analytical robot HENm, which, like the above robot, prepares the correct sample tubes with the correct barcode labels. This is done locally, for example in the ward at the bed, where the barcode on the patient's bracelet is scanned, and then LIS/HIS automatically delivers the information about the order, where after the sample tubes are printed in seconds and delivered in a tray. Then the phlebotomy is performed as usual.

During the design and development of the cart, we have focused on everything should be easily accessible. The cart is not wider than other wagons used until now and there is still easily room to bring it e.g. between two beds. We have tried to make a workplace in front of the car, so when you stand here you have everything right by the hand, and can also easily place the filled test tubes, the used needle etc.

In addition, with the help of several extra features, attempts have been made to make the workflow as optimal as possible, both besides the patient, during transport and at the laboratory. 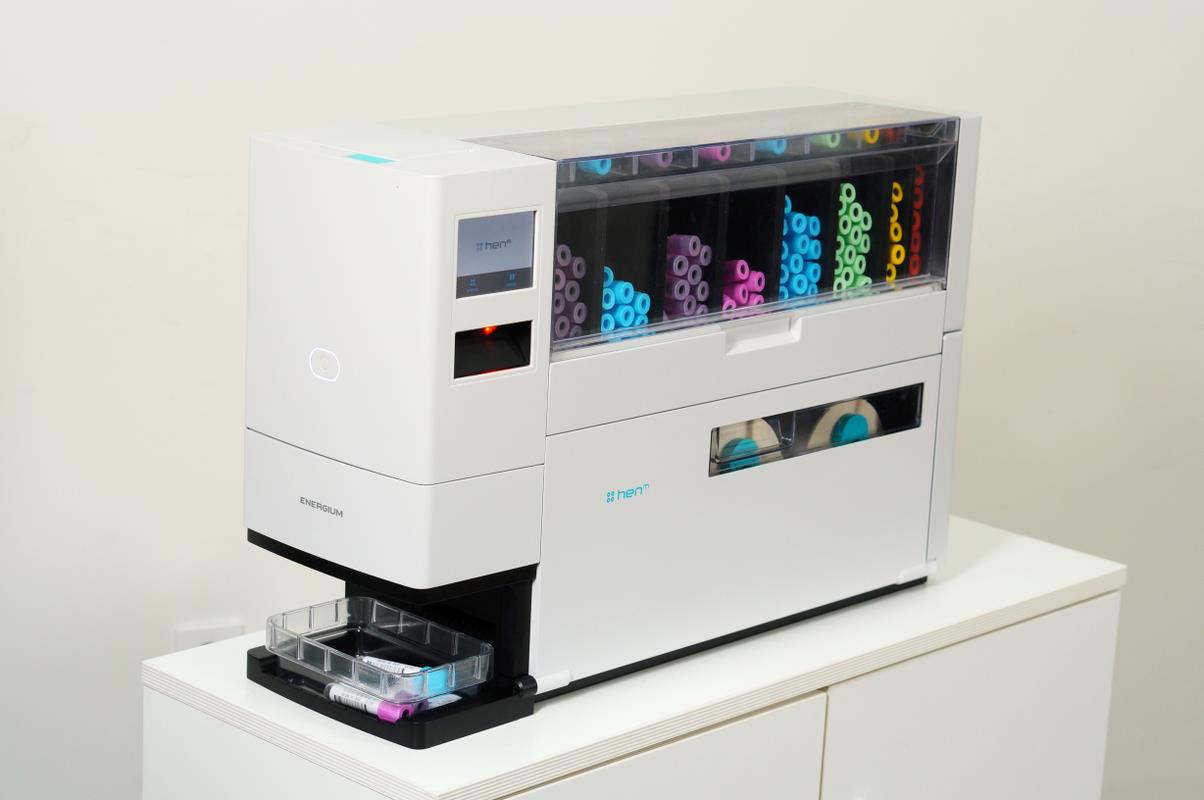